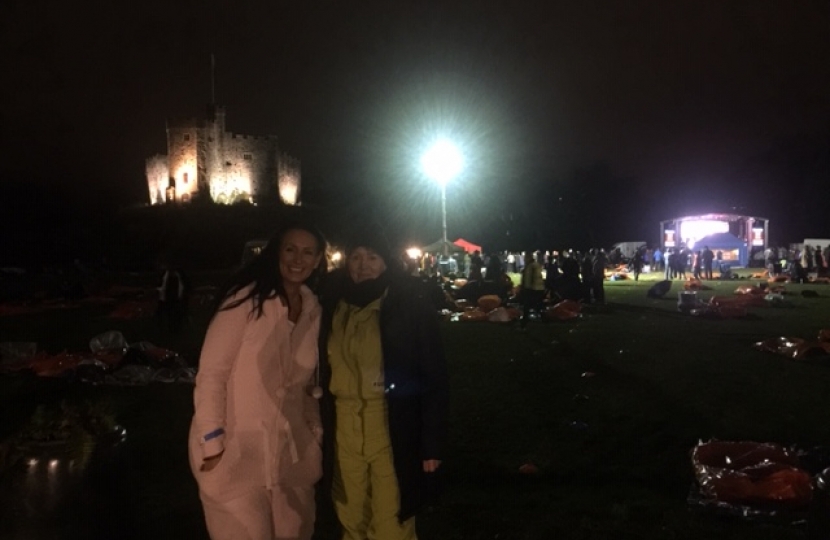 Conservative Cllr. Christine Cave was joined by Cllr. Rachel Nugent Finn and over 400 volunteers at Cardiff Council recently, as Llamau's Big Sleep Out event raised over £121,000 to help homeless and displaced people in Wales and throughout the world.

The Big Sleep Out asked volunteers to join over 50,000 people throughout the world in sleeping out under the stars to help those who have no other choice.

Llamau, whose successful partnership with the Vale Council has made huge steps in developing services for young people at risk of homelessness, hosted Wales' flagship event in Cardiff Castle.

The Vale's Mayor, Cllr. Christine Care who attended the event in Cardiff, said:

"I would like to extend a very special thanks to my fellow Member and friend Cllr Rachel Nugent Finn for joining me for a truly extraordinary weekend to raise funds and awareness of what it's like to be homeless.

"As you will no doubt recall, we didn’t have the best weather that weekend, but the very heavy rain and wind didn’t deter us. Because of the extreme weather conditions, the stage at the Castle was blown over and part of the site  flooded in the early hours of the morning.

"It certainly was an experience Rachel and I will never forget, and it really did highlight how difficult it is to live  - even for one night - on the streets."

Like much of her work this year, Cllr. Cave will continue to raise of the profile of volunteers working in the Vale throughout 2020.

"I will continue this work in the new year, " she said. "There will be an event in March at the beach huts in Barry, were I am planning to rent a hut for the day and make tea for all our volunteers in the Vale that would like to attend. If you know of anyone who is a volunteer then please contact the Mayoral office at the Vale of Glamorgan Council."

A second event later in the year will provide an opportunity for voluntary organisations to learn more about the Mayor's Foundation and the Stronger in Partnership grants.

The aim of the Mayor’s Foundation Grant Fund is to offer grants to Community Groups, the Voluntary Sector and not for profit organisations towards the cost of initiatives within the Vale of Glamorgan that help to support the Council’s vision of 'Strong Communities with a Bright Future'.

We're Investing in Infrastructure across our Country

When we came to office we promised to unite and level up, spreading opportunity across the whole United Kingdom.